We all have a favorite moment of Christmas Eve dinner. What is the highlight of this special dinner for Krakow's chefs, who usually use slow food products in their everyday work? 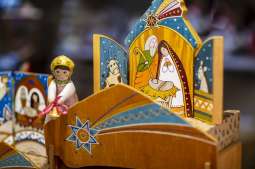 Waiting for the first star, surreptitiously eating the uszka (special kind of pierogi made for Christmas Eve), the taste of borscht, the smell of compote made from dried fruits. Christmas Eve dinner happens only once a year and its preparation is preceded by many hours spent in the kitchen.
- Preparations for Christmas Eve actually start in late summer, when my dad is going mushroom picking - jokes Grzegorz Fic, chef of Albertina restaurant. On the Fic's Christmas Eve table many products come from the home pantry - like sauerkraut or borscht. But not all dishes are traditional. Usually we close the restaurant on 23rd and 24th December, so I have some time for experiments. For ten years now I've been smuggling completely new flavours onto the table. That's how three years ago, the pstrąg ojcowski (Ojców trout) appeared on our Christmas Eve. At the beginning, my dad complained that we were trying to overshadow the carp, which in fact almost nobody in the family likes - Fic smiles. Fic's family has already tried trout tartar and salad. - This year I'll use home-made pickled green tomatoes, hard-boiled eggs, julienne vegetables. The key is to divide the smoked trout as gently as possible, with fingers, never with a knife - explains Albertina’s chef.
His 12-year-old goddaughter Zuzia will help him at work. - It's for the kids that I experiment with less traditional flavours every year. I want to show them something new and I am happy to see how much they like it. Besides, let's remember that eating is supposed to be a pleasure, let's not write doctoral dissertations while cooking. Let's not sit sluggish at the table, which is how we will certainly end up when eating a lot of fried food. Let's eat lighter, cook with good quality ingredients - says Fic, who before Christmas Eve will surely wander around Stary Kleparz food market to buy smoked kiełbasa and go to Liszki, to Kowalik's bakery for their wholemeal bread and challah.
Even though Fic is an advocate of introducing new flavours to the Christmas Eve table, he is most impatient waiting for... dumplings. - I only eat them on Christmas Eve. Dumplings with cabbage and mushrooms are made by my mother from scratch. She freezes a solid portion before Christmas Eve. However, they never taste the same as during this dinner - says Fic, who says that he became a chef thanks to his mother. And now she doesn't want to let him help in the kitchen before Christmas Eve.
- I usually spend Christmas at work, so I'm happy when someone cooks for me - says Cienki, the chef in Art restaurant, who cannot wait for red borscht. - In the past, we used to eat mushroom soup with potatoes, nowadays we make borscht, prepared with the addition of apples and vinegar, with a slightly noticeable note of dried mushrooms - describes Cienki.
On his Christmas table you can also find manna porridge cooked on compote of dried fruits, to which cold milk is added. - This dish was served by my father's family. We stick to tradition, my parents do not like to change the menu - explains Cienki, who will only have a chance to rest on Christmas Eve. - From the first day of Christmas till the New Year I will work at the restaurant. That's where I introduce flavours and products associated with holidays. For dessert, our guests can order, for example, macarons with cottage cheese and poppy-seed mousse, a variation for the Christmas cheesecake and poppy-seed cake. We do not serve traditional dishes, but look for a new image for their ingredients. So instead of borscht we have baked beetroot creme soup, which I serve with panna cotta made with smoked cream and yeast pastries with cabbage and mushrooms – Cienki adds.
Łukasz Cichy, the chef of the Biała Róża restaurant, who currently serves traditional Christmas Eve dishes for lunch, also uses the traditional ingredients of the Christmas Eve dinner in an unusual way. A la carte carp appears in a rather extraordinary version - in a sweet vinegar marinade with tabasco. - I don't like carp, so sturgeon and halibut also appear on my Christmas Eve table. Apart from that, the menu is quite traditional: my favourite borscht, with uszka of course, cabbage with dried peas and mushrooms, dumplings with cabbage and mushrooms, and the another one: with nuts and poppy seeds, dried compote, gingerbread, poppy seed cake - says Cichy. Like other chefs, he does not usually participate in preparations for Christmas Eve - his mother or mother-in-law are the chefs this evening. - I always bring homemade bread with cranberries or plums. I also cook dishes for Christmas - says Cichy, for whom the most important thing during these days is the atmosphere, meeting his family, peace and quiet and taking a rest from everyday rush. And singing together during Pasterka mass, preferably after an adequate dose of mirabelle or hawthorn liqueurs, which help digest all the carefully prepared dishes.
On Cichy’s Christmas shopping list there must always be Zator carp, apples from Łąck, sechlońska suska (smoked plum) and kiełbasa from Liszki. The latter is recommended by the chef to be eaten without any special occasion.
Marcin Sołtys, chef at Filipa 18 Food Wine Art is a firm carp lover. - The carp should spend enough time in milk and onion. Then we cover it in flour, beaten eggs and breadcrumbs. And that smell of oil-fried carp… - smiles Sołtys. He prepares the carp also in Viennese (cooked in wine) and Jewish style. - To the last one I add suska sechlońska, dark beer, raisins, onion, honey, bay leaf - he reveals the recipe. Sołtys also serves untraditional dishes for Christmas Eve like Japanese-style herring or salmon with poppy seeds. His favourite festive moments are decorating the Christmas tree, preparing the table and cooking. Of course, everything is done together with other family members.

Where to eat in Krakow? Check the new Facebook guide!
In cooperation with Kraków City Hall, Facebook issued a culinary guide to the city, based on the recommendations gathered by four Facebook communities.

Slow Food Central Europe – promoting gastronomic heritage
Cheese 2017 in Bra, Italy, was the location for a meeting between  partners from five European Union member states (Italy, Croatia, Czech Republic, Hungary and Poland) to officially launch Slow Food Central Europe.
PUBLIC INFORMATION BULLETIN
OF THE CITY OF KRAKÓW
Places to go
What? Where? When?
For tourists
Recommend