The City of Krakow has created the Four Slow Food Zones project, a new idea for the city's culinary tourism offer. The Slow Food Zones have been described to show the possibilities of valuable spending time in Krakow "in the slow rhythm", away from the beaten and crowded paths 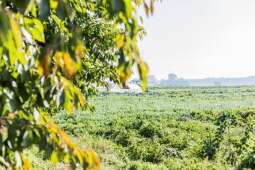 The Four Slow Food Zones are to be a value and inspiration for the residents of Krakow and for more demanding tourists. The Zones will promote slow food products, places where you can eat well, or just relax in a slow life spirit, spend some free time. Krakow wants to encourage tourists to get off the beaten paths and discover the culinary side of the city.

The Błonia Zone is the first of the Zones, encompassing the areas of the former Czarna Wieś, in which the Krakow celtuce was once cultivated - a popular vegetable that, after years of absence on Krakow tables, is experiencing a rebirth and is now cultivated by avid gardeners.

The zones are described in detail in the free eBook "Taste Krakow the Rhythm of Slow”, which can be downloaded from www.kulinarny.krakow.pl and on a printed map, which will be available at Info Krakow.

The Four Slow Food Zones in Krakow were created as part of the Slow Food CE project conducted by the City of Krakow.