And this comes from God's grace

For the front wheel of the cart,

And on earth, Polish bread! 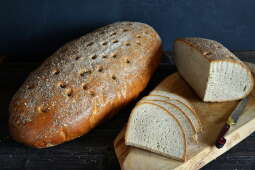 Krakow is famous for baking – it is only city in Europe that has introduced two bakery products to the list of regional products of the European Union. Prądnicki Bread, as this is what we are referring to, dates back to the Middle Ages. What happened that allowed the tradition of more than 500 years survived, and the Polish bread from medieval stalls hit the posh salons of Brussels?

It is 1257. Krakow has just been granted its city charter under Magdeburg law, and local bakers set their stalls on the Main Square for the first time. A hundred years later, Casimir the Great reigned, and 22 bread stalls already operated on the market. The bakers' guild is one of the strongest and most numerous in the city.

It is 1421. Bishop Wojciech Jastrzębiec concludes an agreement with his chef Świętosław Skowronek. The arrangement is simple: in exchange for the land in Prądnicki Biały, the chef is to deliver the best bread to the episcopal table. This is how the first information about the Prądnicki bread appears. At that time, a loaf weighed more than 15 kilograms and was over 75 centimeters in diameter. At the end of the 15th century, the famous Jan Długosz mentions this bread in his chronicle.

In 1787 King Stanisław August Poniatowski came to Krakow, and the inhabitants of Prądnicki wanted to give him what they were most proud of. The ruler liked Prądnicki bread so much that it was regularly brought to Warsaw since then. It was even an inseparable element of the Thursday dinners at the Palace on the Water!

The end of the 20th century. Krakow baker Antoni Madej meticulously - based on information contained in the literature and obtained from the Bread Museum in Radzionków and interviews with the inhabitants of Prądnik, recreated the medieval recipe and restored the production of bread forgotten in the times of the Polish People’s Republic. Again, Prądnicki Bread is once again seen on royal tables -  Prince Charles, heir to the British throne, enjoyed it during his visit to Krakow.

Everything you need to know about Prądnicki bread:

The fragrant oval loaf, which should traditionally weigh up to 4.5 kilograms, must be sprinkled with a thin layer of rye bran. The delicious crust should be 6 millimeters and the bread should grow to not less than 120 millimeters and not more than 150. In a cross-section, the Prądnicki bread has a light color and even porosity. Rye and wheat flour, boiled potatoes, rye bran and fresh yeast are used for its production - the taste of rye leaven should also be felt. Importantly, this type of bread matures. It reaches full flavor the day after it is taken out of the oven. Prądnicki Bread stays fresh for an extremely long time, you can enjoy it for up to 2 weeks!

In 2005, Prądnicki Bread was entered on the National List of Traditional Products of the Ministry of Agriculture and Rural Development, and in 2011 on the list of protected products of the European Union (Protected Geographical Indication).