Where to eat in Krakow? Check the new Facebook guide!

In cooperation with Kraków City Hall, Facebook issued a culinary guide to the city, based on the recommendations gathered by four Facebook communities. 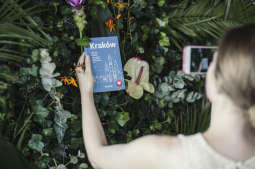 The handbook called “Kraków. Facebook Community Guide through the European Capital of Gastronomic Culture 2019” was written by Magda Wójcik, food journalist and food event organiser, based on the recommendations gathered by four Facebook communities: Krakowskie Wieści Spożywcze, Krakowscy Foodies / Jedlingi w Krakowie, Krakowska Kooperatywa Kawowa and Weganie i wegetarianie Kraków, whose leaders were asked about their favourite places in town. Each group is made up of several thousand people and serves as a genuine repository of knowledge about the city’s culinary life. - We are very proud, especially because this is the ninth guide in the world and the first in Poland created in cooperation with Facebook - said Facebook’s director for Central-Eastern Europe Robert Bednarski.

‘We have prepared for you a guide to lead you through places where the inhabitants of Krakow eat and where they entertain their guests. We’ll take you to the places whose owners simply love feeding people. We’ll take you to cosy restaurants, to venues tucked away in parks, to beautiful gardens hidden between Krakow’s tenement houses. We shall treat you to great coffee and a cake, show you around the streets of Stary Kleparz, we shall eat dumplings in a milk bar and gourmet meals in a historic tenement house, and in the evening we’ll take you out for a glass of wine and drink many worldclass cocktails together, watching the burlesque at the same time. In short — you can spend the entire day with us!’ – we read in a guide’s introduction.

The printed version of the guide has a circulation of 10,000 copies, which are available in InfoKraków points, as well as in selected restaurants and cafés in the city. The electronic version can be found here.

Slow Food Central Europe – promoting gastronomic heritage
Cheese 2017 in Bra, Italy, was the location for a meeting between  partners from five European Union member states (Italy, Croatia, Czech Republic, Hungary and Poland) to officially launch Slow Food Central Europe.
PUBLIC INFORMATION BULLETIN
OF THE CITY OF KRAKÓW
Places to go
What? Where? When?
For tourists
Recommend